In response to alerts transmitted by the ECLAIRs, the Microchannel X-ray Telescope (MXT) will observe gamme ray bursts (GRBs) in the soft X-ray range (energy between 0.2 and 10 KeV), from the very beginning of their afterglow emission. The MXT is being developed in France by CNES and CEA/Irfu, in close collaboration with the University of Leicester in the United Kingdom and the Max-Planck Institute für extraterrestische Physik in Germany. 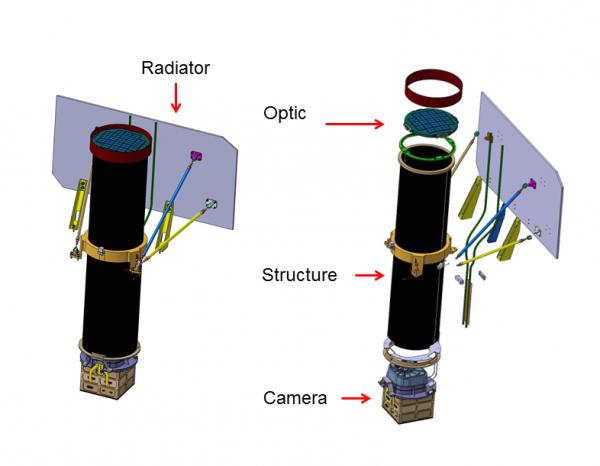 Sketch of the MXT: the diameter of the optics is 24 cm, the focal length is 1.15 m and the tube is made of carbon fiber. The optical module has a weight of 1.8 kg while the entire assembly (optics, tube, radiator, camera and on-board computer) weighs 35 kg. Credit: CEA / CNES

The MXT is composed by an optical module based on 40 mm sized micro-channel plates, making a so-called micro-pore optics (MPO), coupled to a focal plane camera equipped with an X-ray sensitive pnCCD.  The MXT will deliver images and spectra of sources in the 0.2-10 keV range with an energy resolution as good as ~75 eV (at 1.5 keV). The field of view of the instrument is 1.1° x 1.1°.

The MXT is conceived to locate sources much more precisely than the ECLAIRs does, with an accuracy of less than 1 arcmin, which increases up to ~20 arcsec in the case of very bright sources. This second step in the localization process will then permit, using also images obtained by the visible telescope VT, to refine the position of the observed sources. The position will be automatically calculated on board and transmitted to the ground via the VHF alert network.

With a detection sensitivity of ~10-12 erg/cm2/sec reachable in a ~10 kse (10 000 s) long observation, the MXT will be able to follow the evolution of the afterglow emission for a whole day after the initial prompt signal.

This sensitivity will enable the determination of the spectral index, which is the form of the energy distribution of the emission. This parameter is important because it permits to reconstruct the distribution of energetic particles responsible for the X-ray emission as well as obtain information on the physics of the shocks. Moreover, thanks to its soft operational band the MXT will allow to measure the absorption on the line of sight of the emission originating from the GRBs, which occurs both in the intergalactic medium and in the host galaxies.